A downloadable game for Windows and macOS

It is the year 2039. You are a junior developer at Superior Robots LLC, a company specialized in deploying robots for various situations. Usually, your company specializes in deploying the usual kinds of robots: Cleaning bots, service bots for blind people and other persons with special needs, etc. But John Doe, the CEO, recently had the brilliant idea (or maybe not so) to start creating robots for the military, and they hired you and other junior interns to code the robot’s empathy core. What could go wrong? Not much, right?

The robots are after you! You must defend the robot factory but beware, this game is impossible to win. what is your highest score?

You are equipped with an unstable beam shooter which is powered by a very volatile battery, and each beam is connected to your shooter by a tiny portion of this battery which gives it a targetting direction. Your beam has an optional radar which can notify when your crosshairs are on a robot and you can shoot, press the letter R to enable it. This is useful for players who are not used to centering things on the screen via audio or just want the game to be a little easier. Don’t rely on it too much though, as soon as your destroyChance is more than 10%, the radar will be disabled and you will not be able to turn it back on! Every beam you shoot, as well as every stray beam (beams which do not hit any robots and are lost forever), increase the chance of your weapon exploding. Shots increase it by 0.3% and stray bullets by 0.5%. As your destroy chance percentage increases, robots move faster, and spawn faster.

Your beam always starts at a destroy chance of 1%. Can you lose the game on your first shot?

There are two types of robots. The primary robot, which is the most common, has a more mechanical voice, has rough footsteps and is generally cheeky and violent. It walks forward, with no regard for its safety, and just comes after you. If it reaches you, you are destroyed.

The second robot, the superbot, is a bit more dangerous, but less common. It has a tuned, melodic voice, and walks much more smoothly, and is also slower due to its heavy engines and weapons. The special thing about this robot is that it will jump to a new, random location from time to time. You will hear it stop moving, a beep, its mechanical engine whirring, and it will randomly appear somewhere else. Nice little robot!

also, take into account that if any robot reaches you, you will lose!

Powerups will randomly start appearing in the game! In order to obtain one, you must time it so your bullet shoots at it. The powerups appear at the left or right, and begin moving towards the other side. If they reach the other side, they fade away and you will have to wait for another powerup. The trick is to shoot down the powerup when it passes you, but don’t shoot too soon or too late, because the powerup is not directly in front of you, but a little towards the robots. You will get the hang of it with practice.

The following powerups are currently available:

Rapid fire might sound like a bad thing in a game where your weapons might explode at any moment, but rapid fire is doing its own thing here! For 10 seconds, you will get a gun which does not explode! Just point at the pesky robots and they will be instantly shot down without you pressing any other key!

This powerup sounds like a bell when you pick it up, and is probably the most valuable item you can obtain. For each of those you collect, if your next bullet would have exploded your weapon, you will be saved! Note that if you are saved, that bullet isn’t shot so make sure you shoot it again if there is a robot about to get you!

This is just that, more points! Pick it up, and you will get an extra 5000 points instantly!

When you launch the game you will be greeted by the logo and then the intro scene. You can press escape or enter at any time to skip either of those scenes. When the scene terminates, the game will begin. There are no menus in this game as of now.

at the end of the game, you will be presented with your stats. To exit, press enter or escape. If you are using a screen reader and want to hear your stats again, press any key. Pressing the control key will make it shut up.

If you enjoy the game, please consider Making a Donation to contribute towards further development! 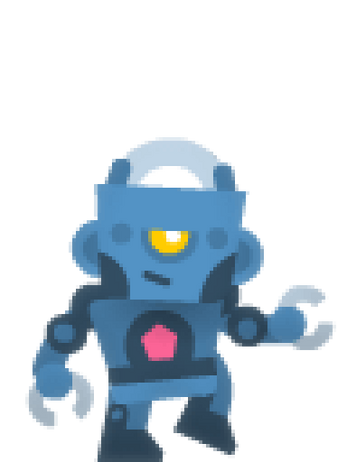